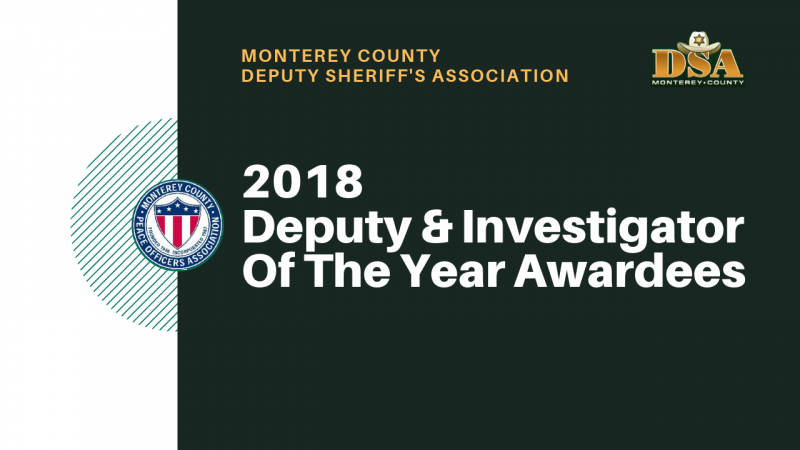 2018 Deputy Sheriff and Investigator Of The Year Awardees Announced

On Friday, March 22, 2019, The Monterey County Peace Officer's Association held their annual awards ceremony to recognize law enforcement personnel in Monterey County who had done an outstanding job in 2018.

Deputy Sheriff Of The Year

During the beginning of the summer in 2018, Deputy Lilga saw a vehicle which matched the description of a vehicle burglary suspect. As she followed the vehicle, she quickly realized the license plate for the vehicle was not assigned to that particular vehicle. After stopping the vehicle, she began an investigation which quickly revealed the person she had stopped, was, in fact, the suspect in several vehicle burglaries in the Carmel Valley. In fact, up until the traffic stop, law enforcement agencies in the Carmel Valley were taking 10 to 15 vehicle burglary reports a day, with a total of about 200 burglaries in all.

In addition to this incident, Deputy Lilga was involved in two other critical and life-saving events, to which she was awarded the Distinguished Service Award and the Life Saving Award by the Monterey County Sheriff's Department. Deputy Lilga is also the department's 2018 Deputy Sheriff of The Year.

Deputy Reanna Lilga receives the Monterey County Deputy Sheriff's "2018 Deputy Sheriff Of The Year" Award at a separate ceremony in December of 2018.Deputy Lilga has been a member of the sheriff's department for 14 years. She began her career working in the jail for 12 years. During that time, she was a training officer responsible for training newer deputies assigned to the jail from the academy.

Deputy Lilga is a member of the department's mounted unit, with her appaloosa named Ace. She is also a tactical flight observer for the department's aero squadron, known as "Idaho 90," with over five years experience in the air.

Currently assigned to the enforcement bureau, Deputy Lilga works patrol out of the Salinas station.

Investigator Of The Year

Alicia Cox began her career as a police officer for the city of Soledad, where she quickly learned she had a passion for in-depth investigative work. She left the department for a position as an investigator with the Monterey County District Attorney's Office, where she has been for the last 11 years.

Investigator Alicia Cox and her family, with Monterey County District Attorney Jeannine PacioniInvestigator Cox worked in the welfare fraud unit for about four years. In 2012, she was promoted to the real estate fraud unit, where she is currently assigned.

Working closely with local, state, and federal agencies, Investigator Cox has investigated complex cases, some of which involve hundreds, if not thousands, of victims. Due to her perseverance and work ethic, she was voted by her peers and supervisors as the investigator of the year.

Deputies Are Saving Lives Every Day

Every day, the brave men and women of the Monterey County Sheriff's Department provide some of the finest law enforcement services to the people of Monterey County.

At a recent awards ceremony, a collection of deputy sheriffs received awards for their outstanding performance during critical situations within the last two years.


From Your Board of Directors

​Deputy Lilga and Investigator Cox are excellent representatives of the department, the association, and the law enforcement profession as a whole. With Women's History Month being celebrated last month (March), the heroes are making history themselves with their tenacious work.

On behalf of the board of directors, and the entire association, we congratulate you on your much deserved awards.