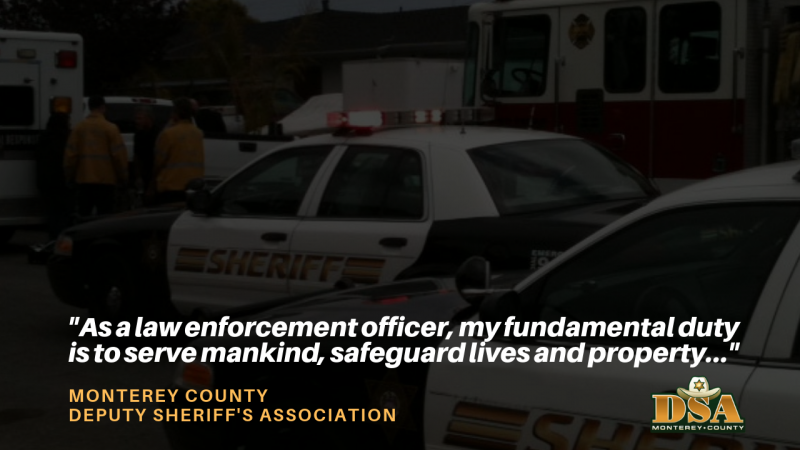 Every day, the brave men and women of the Monterey County Sheriff's Department provide some of the finest law enforcement services to the people of Monterey County. At a recent awards ceremony, a collection of deputy sheriffs received awards for their outstanding performance during critical situations within the last two years.

On September 10, 2017, Deputy Reanna Lilga was driving home to South Monterey County after her patrol shift in North Monterey County. At approximately 2 AM, she saw an overturned pick-up truck on Interlake Road. There was a pool of blood near the cab of the truck, but no one was inside or around the crash site.

She called 911 to report the accident to the California Highway Patrol (CHP). When the CHP arrived, they were convinced that the driver had been picked up by someone. Deputy Lilga began checking the area and found a barking dog about a quarter mile from the accident. She attempted to call the number on the dog's tag, but was unable to reach anyone. She returned to the scene and told the CHP officers that she thought that the dog had been following its owner and she would take the dog with her and continue to search for the driver. Due to the remote area where this crash occurred, it was highly probable the dog belonged to someone who had been in the crash.

About two miles from the crash site, Deputy Lilga found Ben Plaskett walking with a major head injury. She immediately called 911 and advised the dispatcher that the victim had major head trauma and would need to be flown by helicopter to a hospital. She loaded Ben into her car and drove him back to the crash site. When he got into her car, his dog jumped on his lap. He began to cry and thanked Deputy Lilga for finding his dog.

If Deputy Lilga had not located Ben, he most likely would have died from the severity of his wounds. Ben was ultimately flown to a hospital in San Jose, and the dog was returned to his family.
For saving Ben's life, Deputy Lilga was awarded the Life Saving Medal.

On March 31, 2018, Sergeant David Vargas, Deputies Jason Sullivan, and Brian Nisse responded to multiple gunshots being fired in the 300 block of River Road, near the Salinas River area.

After arriving in the area, the deputies left the safety and cover of their patrol vehicles to locate the subjects. While walking along a road near the river bed, a single gunshot from a high-powered rifle was fired near their location.

The deputies retreated to their vehicles and were in the process of devising a plan when they heard a vehicle start. Soon after, multiple gunshots were fired from a close distance.

A second burst of gunshots was fired, and Deputies Sullivan, Nisse and Sergeant Vargas had to seek cover by lying against a small dirt embankment. Even though there were bullets traveling over their heads, they continued to direct units to their location and prepared to take the unknown subjects into custody.

A high-risk felony traffic stop was conducted on a dirt access road along the Salinas River. All four occupants were safely removed from the vehicle and a .300 blackout, short barreled AR style rifle was located concealed in the vehicle, along with a high capacity magazine and additional ammunition. Two of the occupants were determined to be responsible for the shooting and were arrested.

The deputies were awarded the Distinguished Service Award.

"On behalf of the Monterey County Deputy Sheriff's Association and the board of directors, we commend these deputies for their actions and for representing the law enforcement profession so well. People are alive today because of what you did."

Saving The Life Of An Armed Suspect

On August 20, 2018, Sergeant Andrew Kobayashi, Deputies Mark Lilga, Reanna Lilga, Cameron Von Dollen, Michael Davis, and Brian Nisse were dispatched to Salinas Road in Pajaro, in regards to a man who was acting aggressive, threatening his family, destroying items in the house and threatening to jump out of a three-story window.

The deputies arrived and encountered the man, who became aggressive and non-compliant, barricading himself inside his bedroom, armed with a screwdriver. At one point, he lunged at the deputies with the screwdriver and struck one of them. After an hour, the man began to start a fire in the bedroom. The deputies used tear gas to try to get the man out of the room, but it had little affect on him. The deputies were forced to enter the room and battle the fire and smoke and fight through the tear gas to rescue and arrest the man. The man continued to resist and fight the deputies, and he had to be physically subdued and restrained.

All deputies showed restraint and professionalism when confronted with the armed man. They continued to help save his life and prevent further property damage by confronting him and battling the fire that could have been catastrophic and deadly. The deputies on the scene showed great teamwork, perseverance, professionalism, and their commitment to protect and to serve our community.

The deputies involved in this incident were awarded the Distinguished Service Award.

A Suicidal Man Is Saved By A Calm Deputy

On November 25, 2018, Deputy Jacob Meilan was dispatched to the area of Scenic Road and Ocean Avenue in Carmel for a report of a suicidal man. An 18-year-old had contacted his family and friends and stated his intention to commit suicide. His family was able to track his cell phone to the location in Carmel.

Deputy Meilan was straddling on two slippery rocks, and underneath him were ocean waves crashing into the rocks. He began communicating with the suicidal subject, explaining to him the dangerous situation he was creating for the people there to help him. The man told Deputy Meilan he did not want to speak with him.

After a short time, the man began to relax, in large part due to Deputy Meilan's calm and collective manner. The male finally cooperated and walked off the rocks. He was escorted by Deputy Meilan to an ambulance where he was transported to Community Hospital of the Monterey Peninsula for a mental health evaluation.

Deputy Meilan placed himself in a precarious position to successfully save the life of a young man in distress. The male was saved that night due to the bravery and heroism of Deputy Meilan and the other officers on the scene.

Deputy Meilan received the Life Saving Award for his actions.